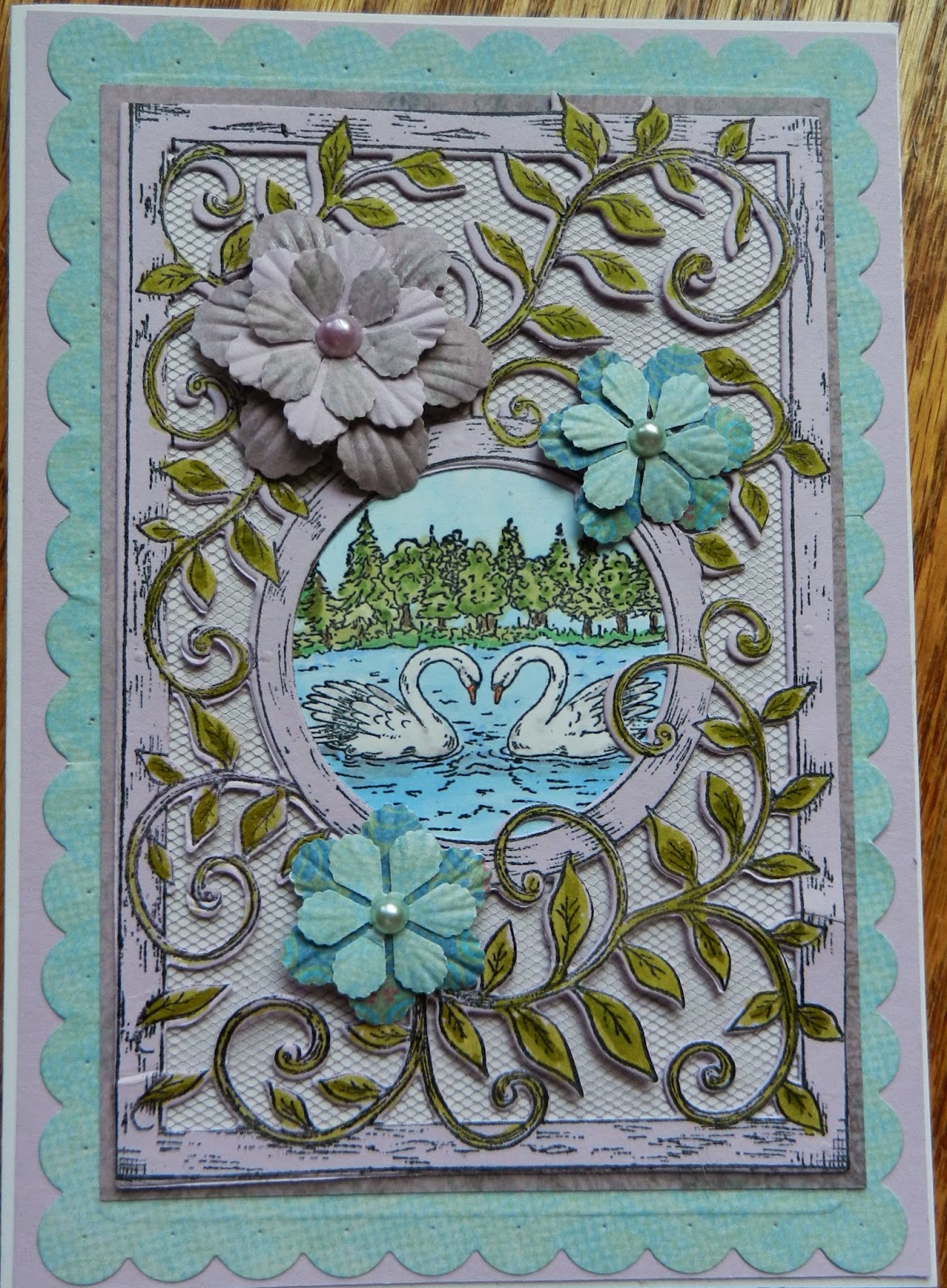 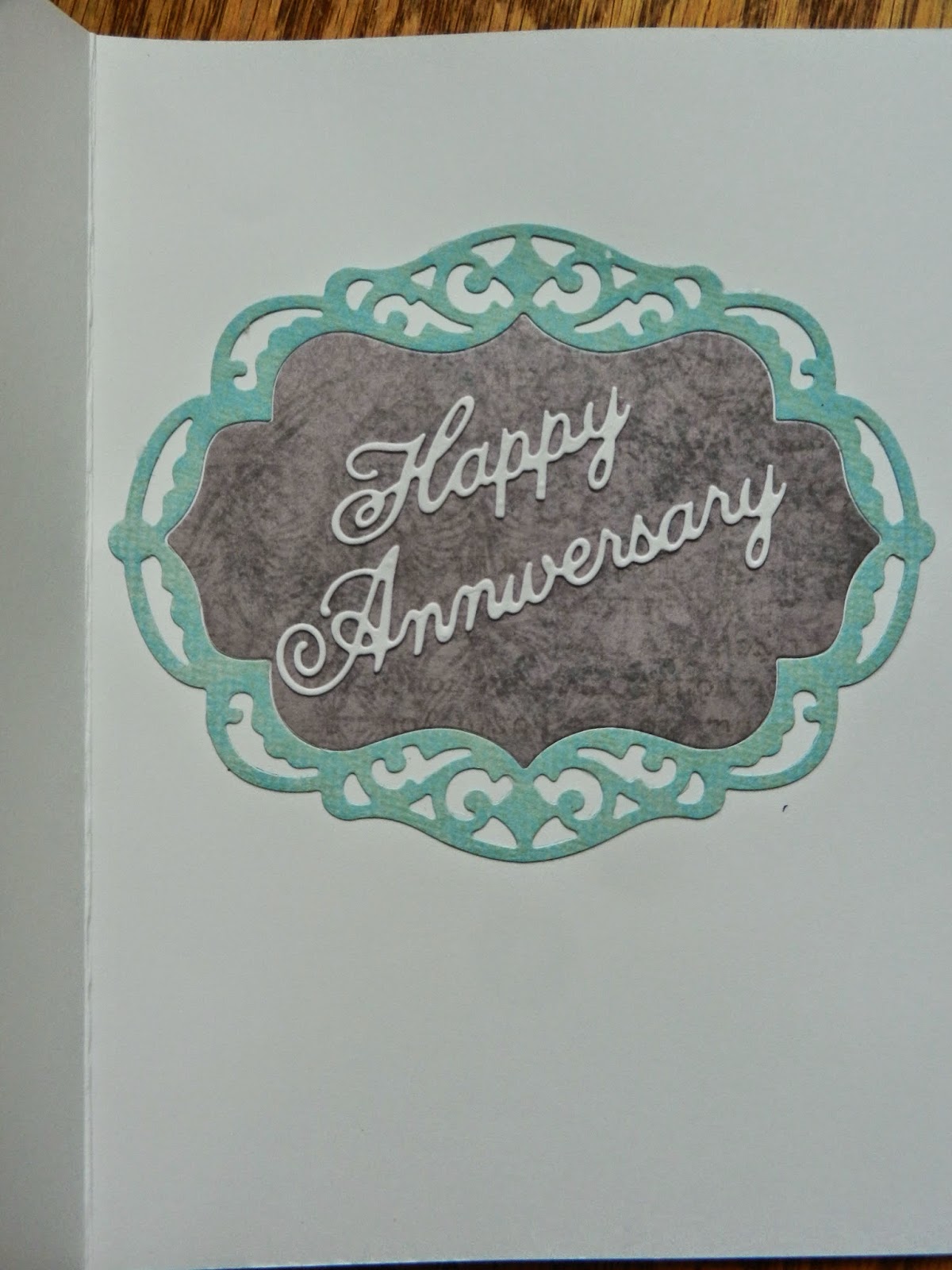 VINTAGE FRAME:
5X7 CARD
Card Front:
Items used:
Heartfelt/ Spellbinders Decorative Leafy Die HCD731
Heartfelt Vintage Floret Frame HCPC3522
Heartfelt Feathered Friends HCP3523
Nellie Snellen Large Flower Flp003 Jumbo, Flp002 medium, and Flp009 Combi
Cheery Lynn Reflection rectangle DL199
Tulle
Spectrum Noir markers
Tim Holtz markers
I started by stamping the image on the paper and then lined it up to cut out with die. I then used the green marker to color the leaves. I stamp the swan image and color with markers. Then I glued it in the center of the frame. Added tulle underneath the whole frame. Thanks Bonnie. I layered around the frame with paper.  I cut out the rectangle with the reflection dies to fit.  Made another layer and added to the card.
Card inside:
Paper Artist cutting dies HTOP5309
Cheery Lynn Happy B214 Anniversary B243
Cut them all out and added to the inside. 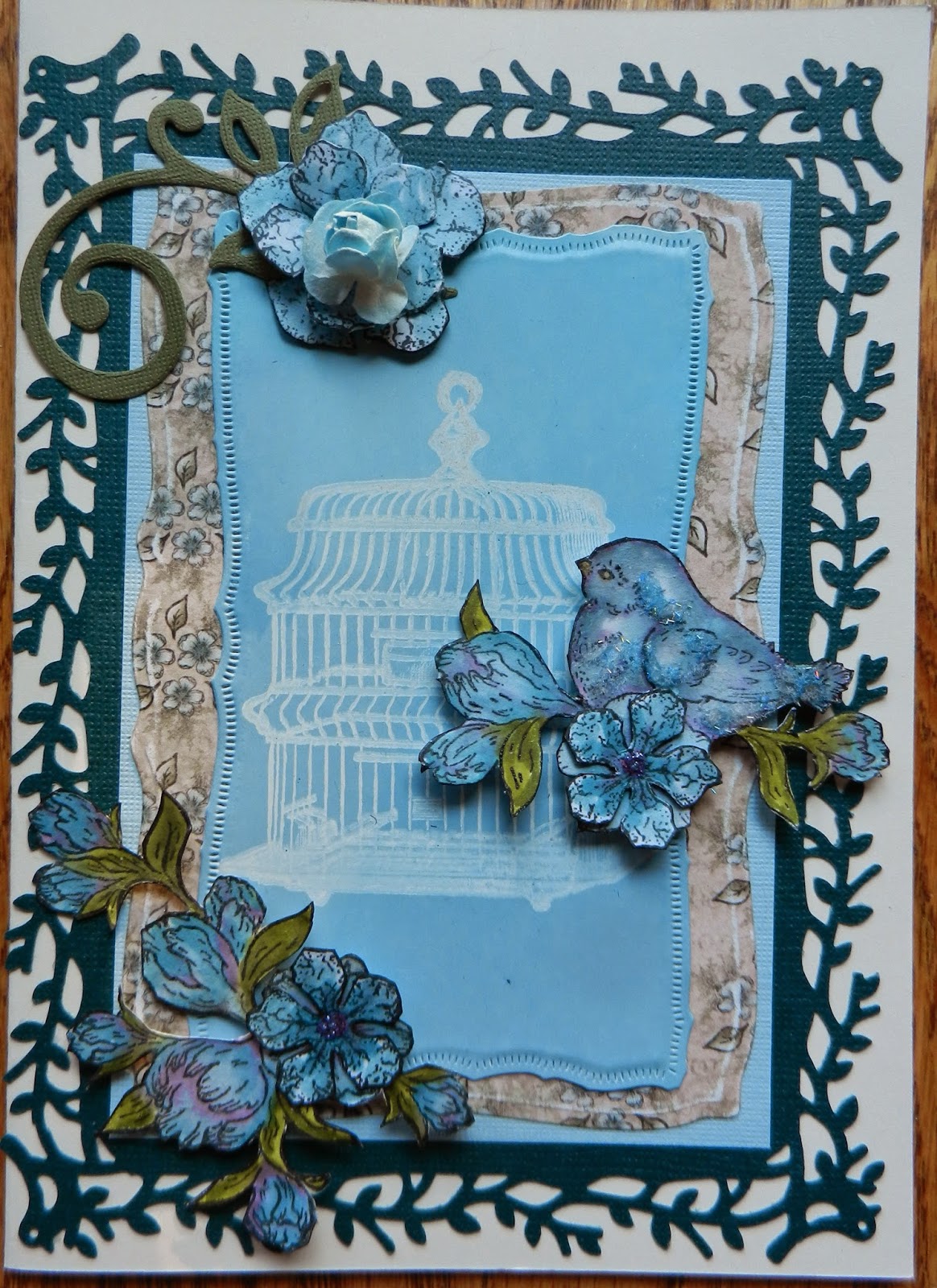 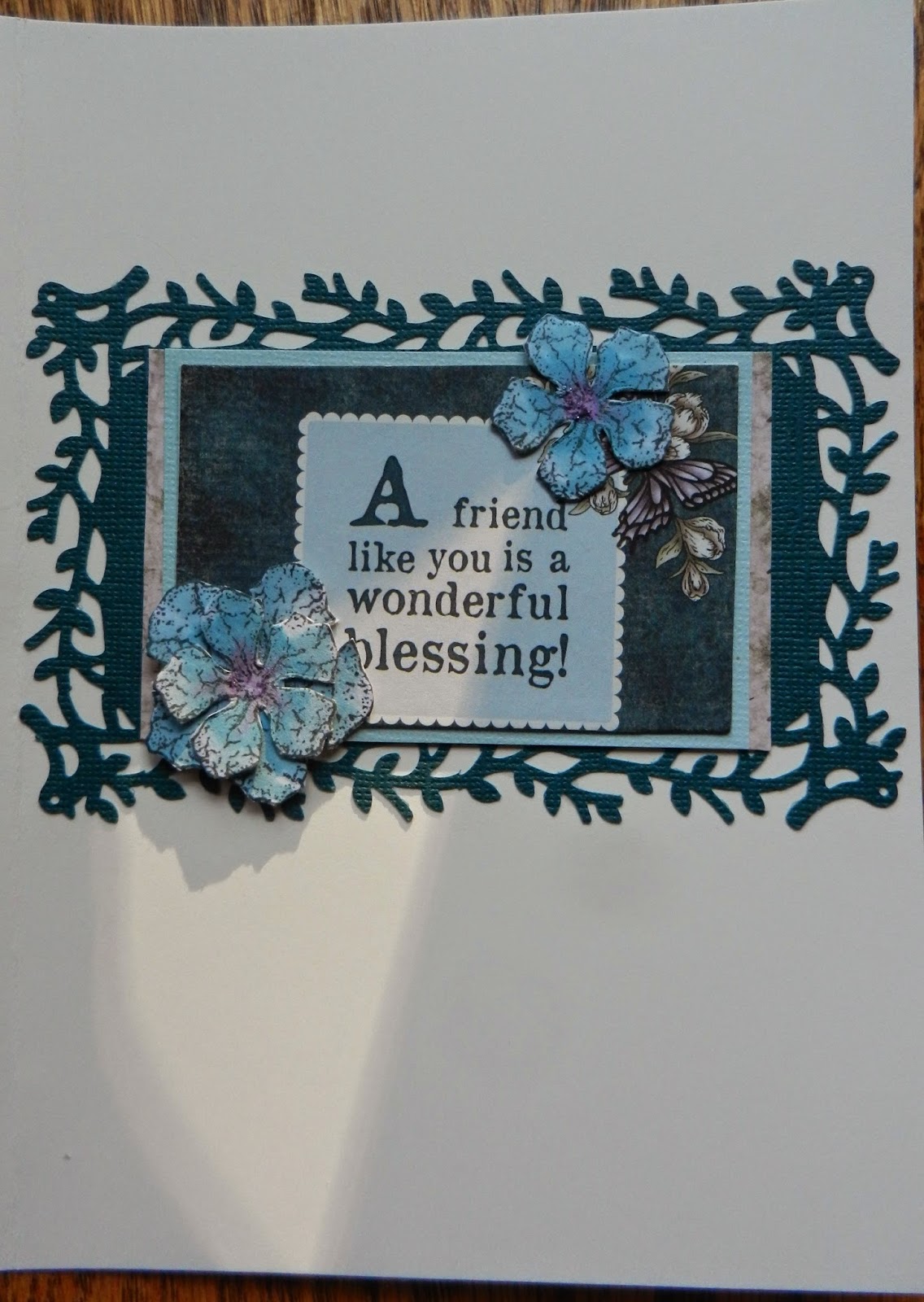 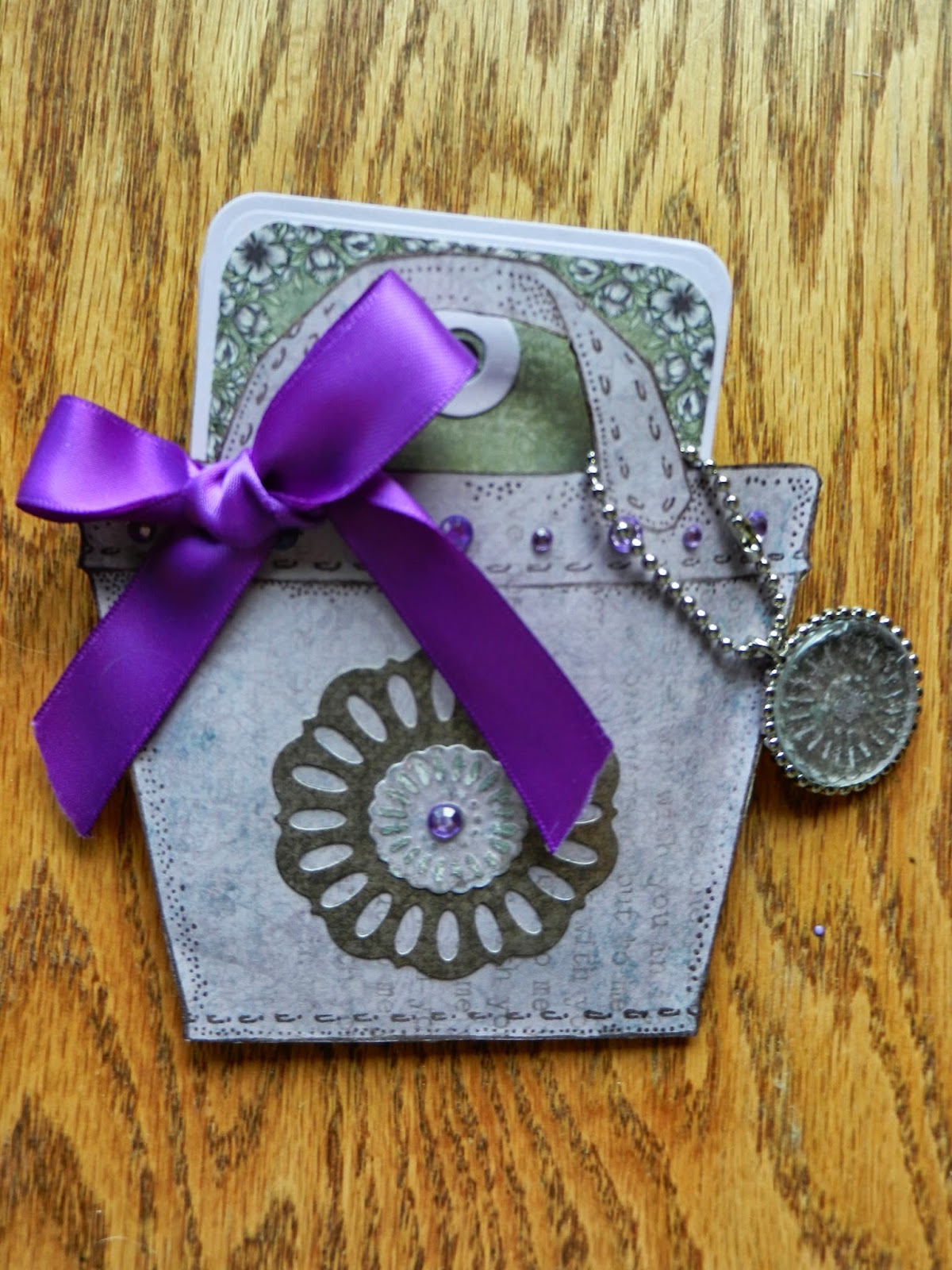 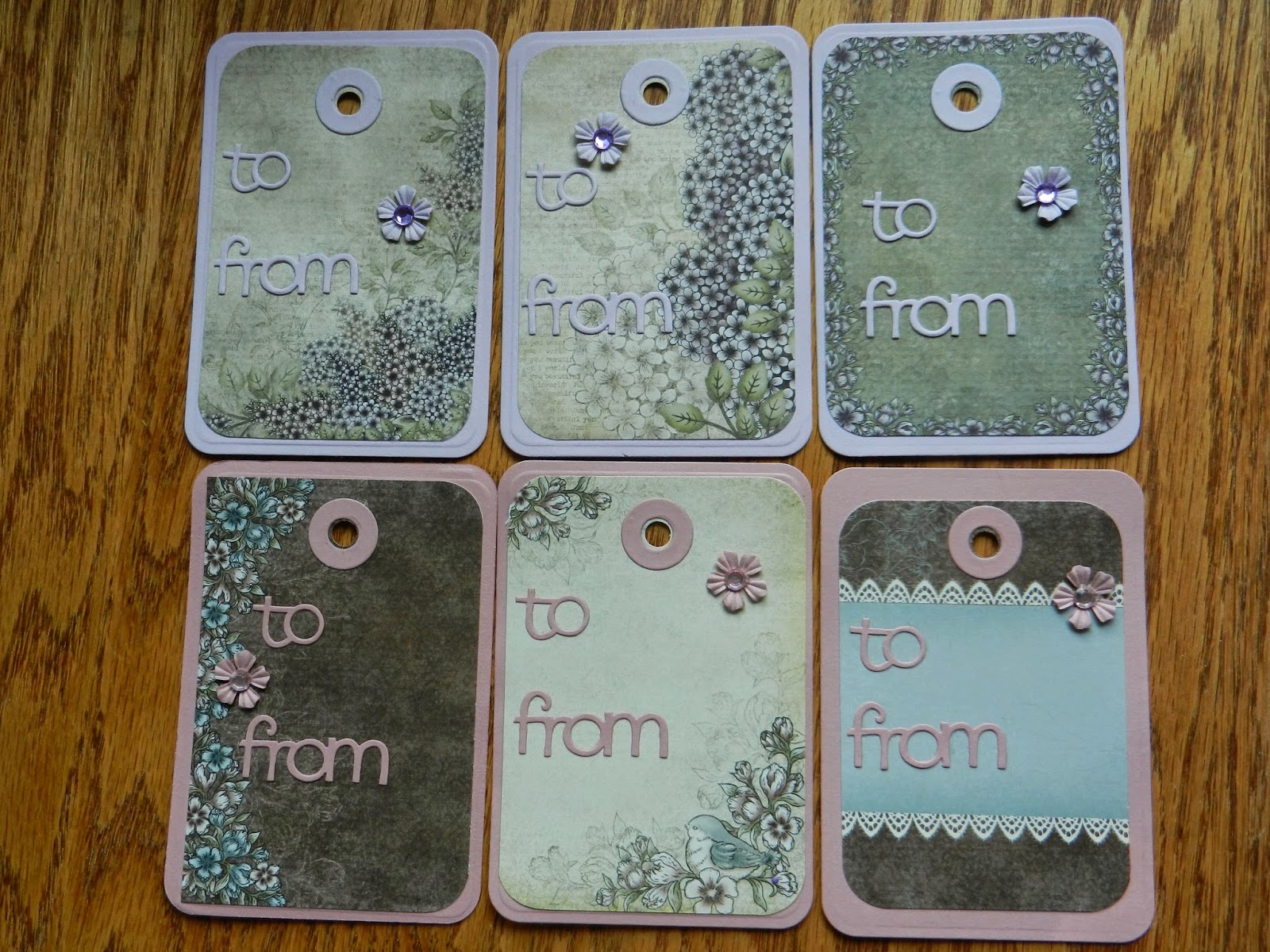 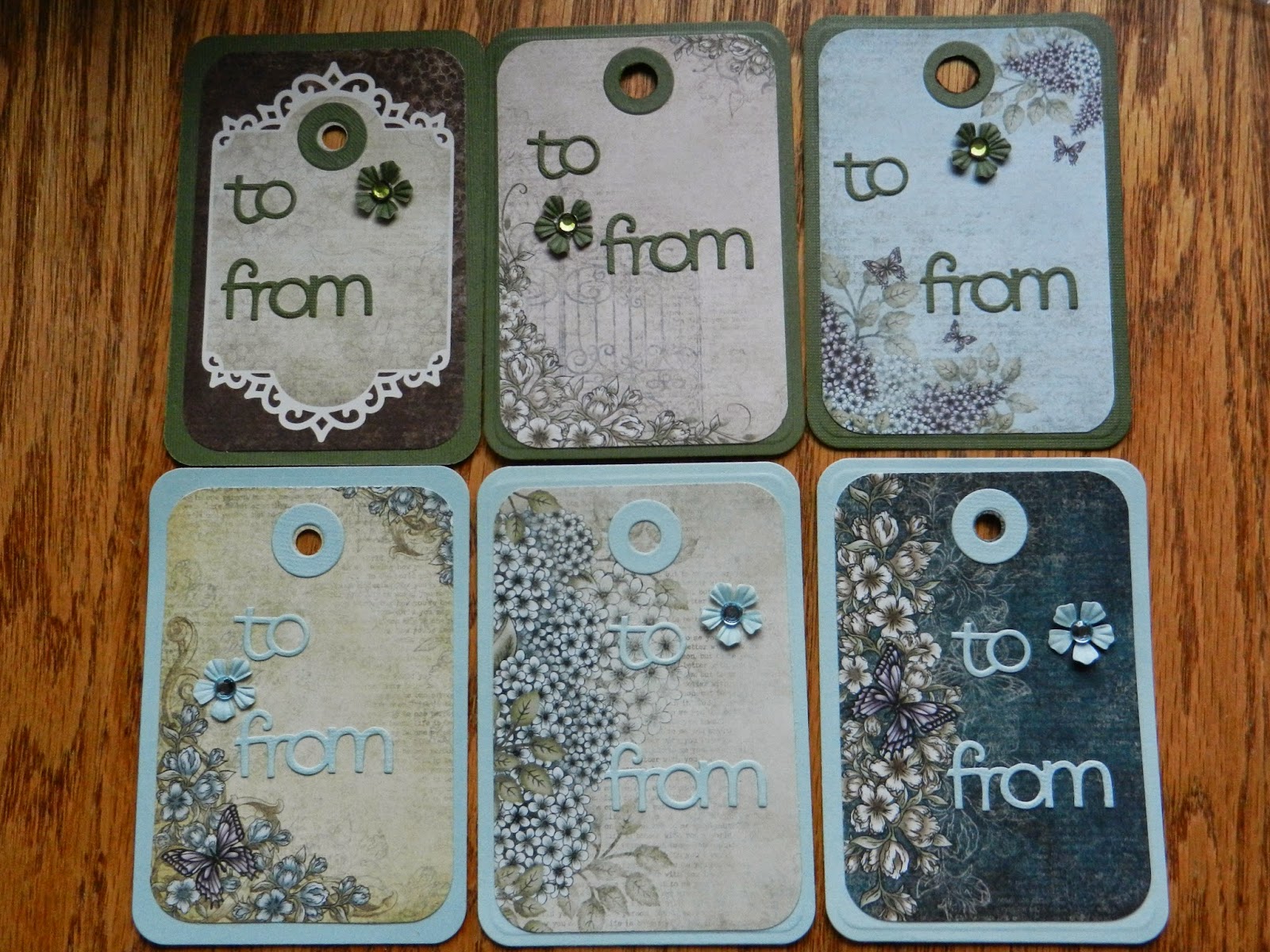 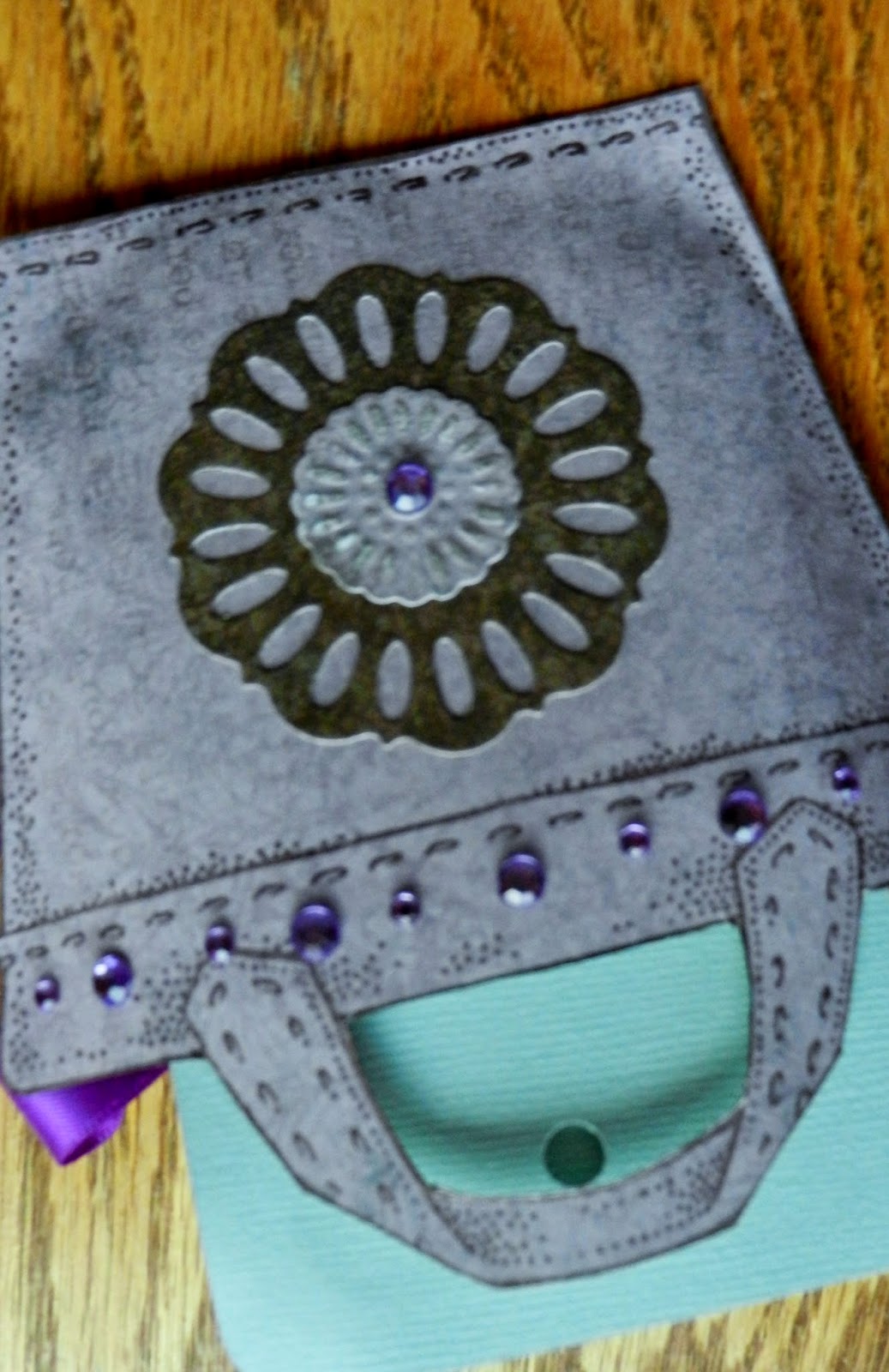 TOTE BAG:
ITEMS USED:
TO Much Fun Rubber stamps bag
Heartfelt Posy Patch paper
Spellbinders A2 Curved Matting Basics A
Corner rounder
Spellbinders Blossom tag Accents S5-072
Memory box Pocket Gift Tag 98347
Nellie Snellen punch Flp-027
Cuttlebug Oliva
Epiphany Crafts Shape Studio 25 circle and silver bezel
Ink and embossing powder
Ribbon
Rhinestones
Hole Punch
Stamp the bag and emboss. Cut out and glue together. Cut out the Spellbinders blossom and distress. Add rhinestones to the bag. Cut out the several colors with the spellbinders curved matting basics. Used the small pieces with all the paper, just smaller in the center of the tag. Used the circle from the pocket tag to enhance the hole at the top. Used a hole punch to out small circle. Decorated the tags with a flower and the to: and from: . Added a bow to the front. Used the Epiphany craft shape studio to make a bezel to match the decoration on the bezel. 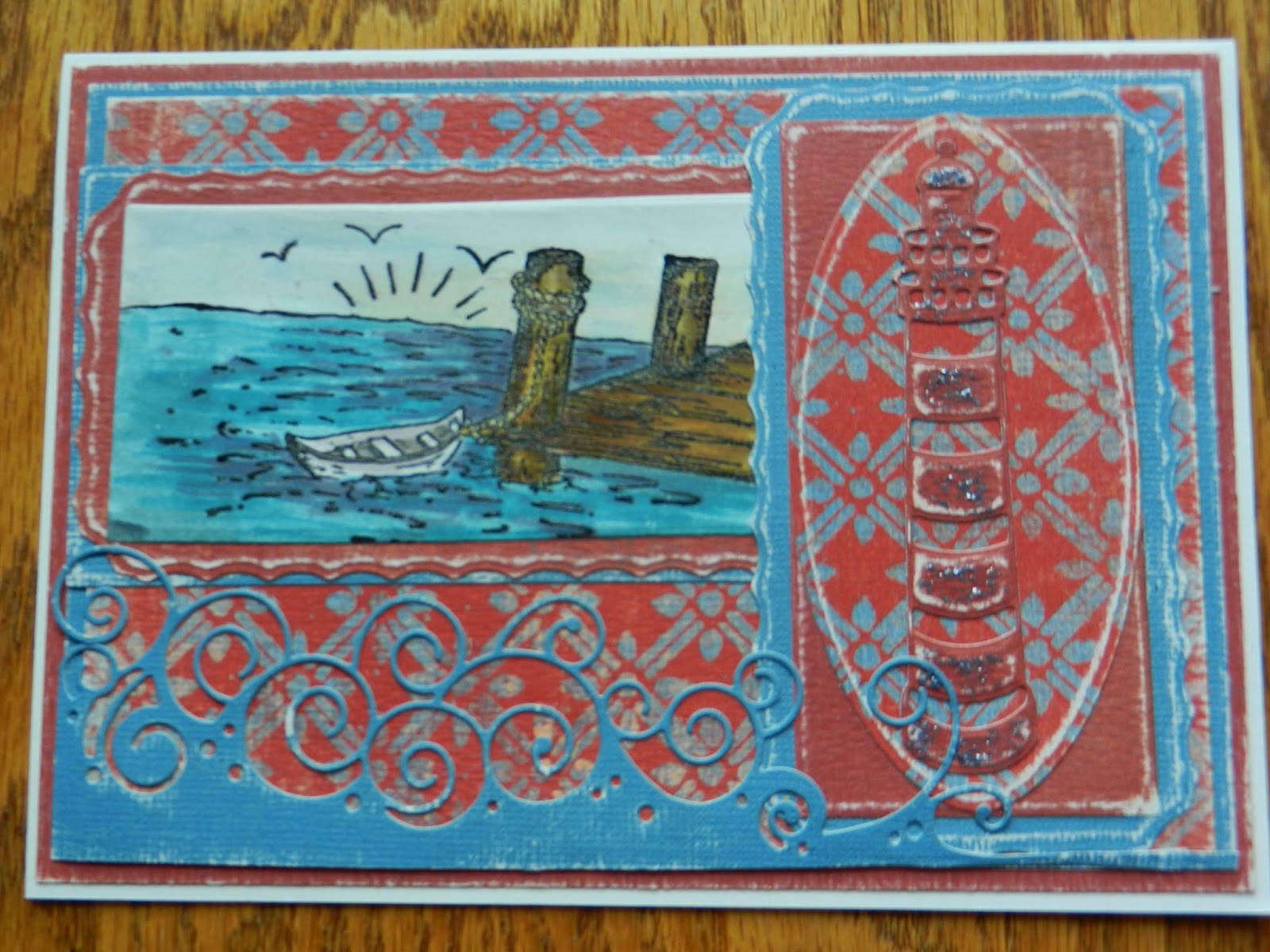 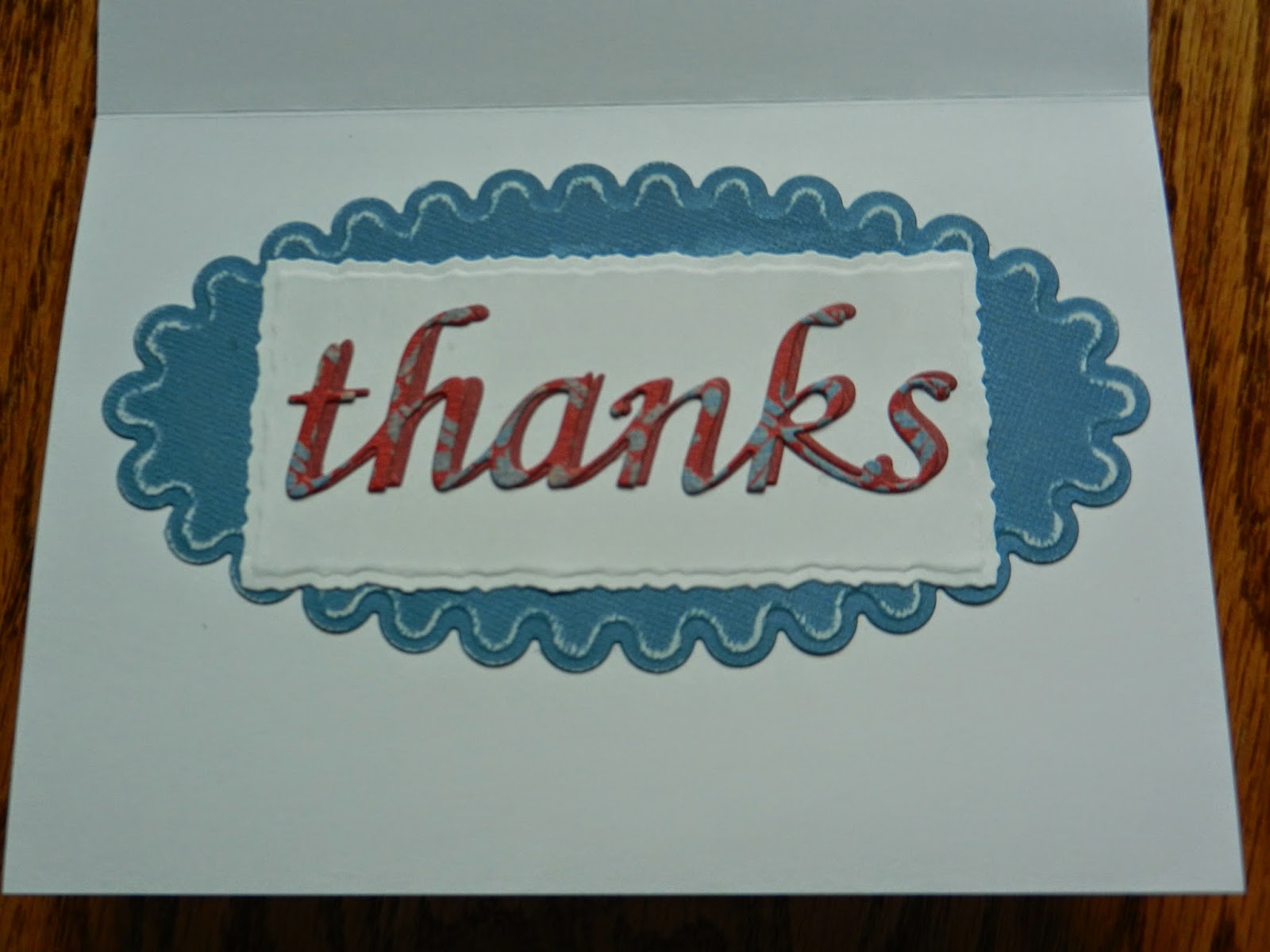 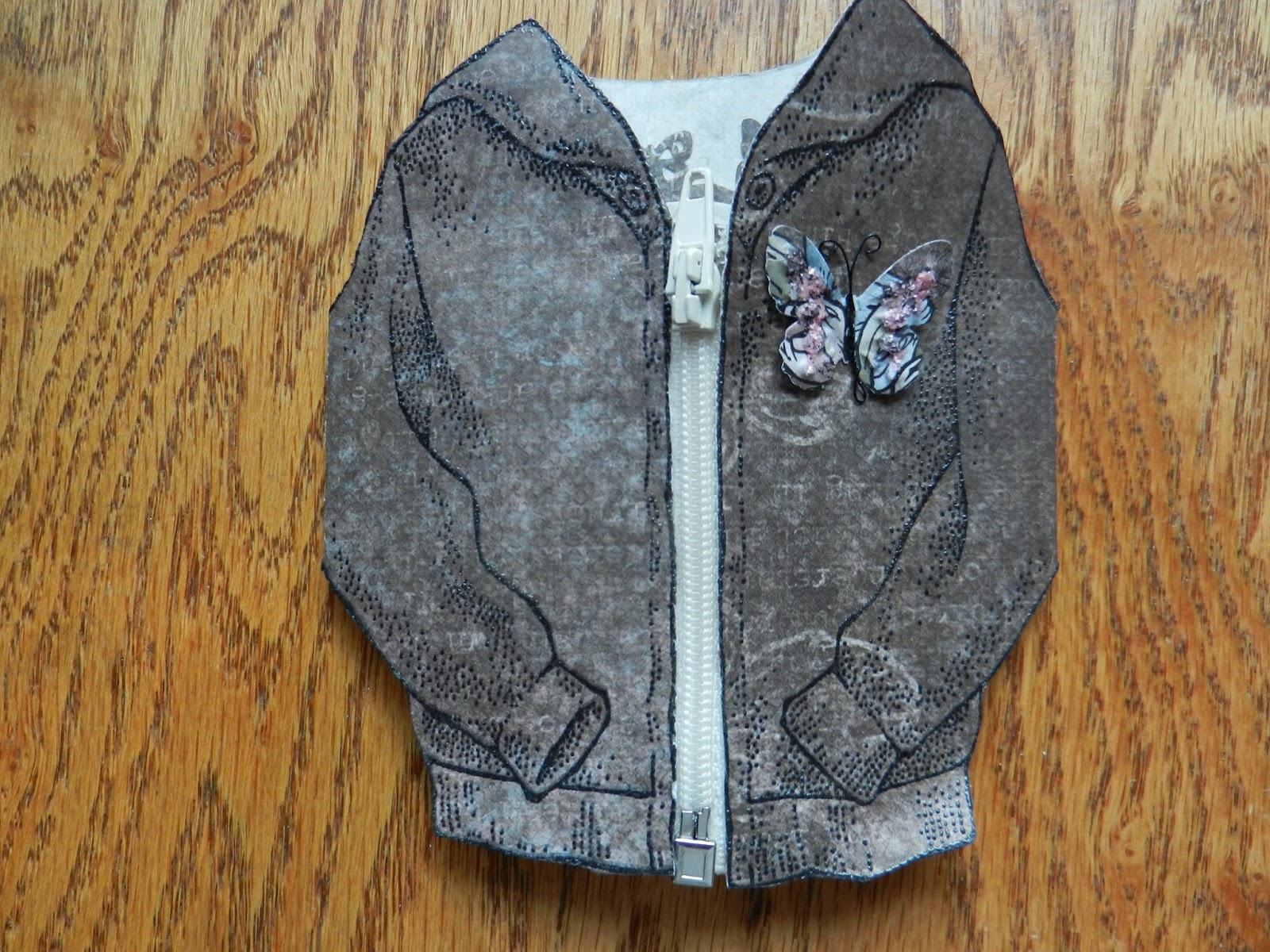 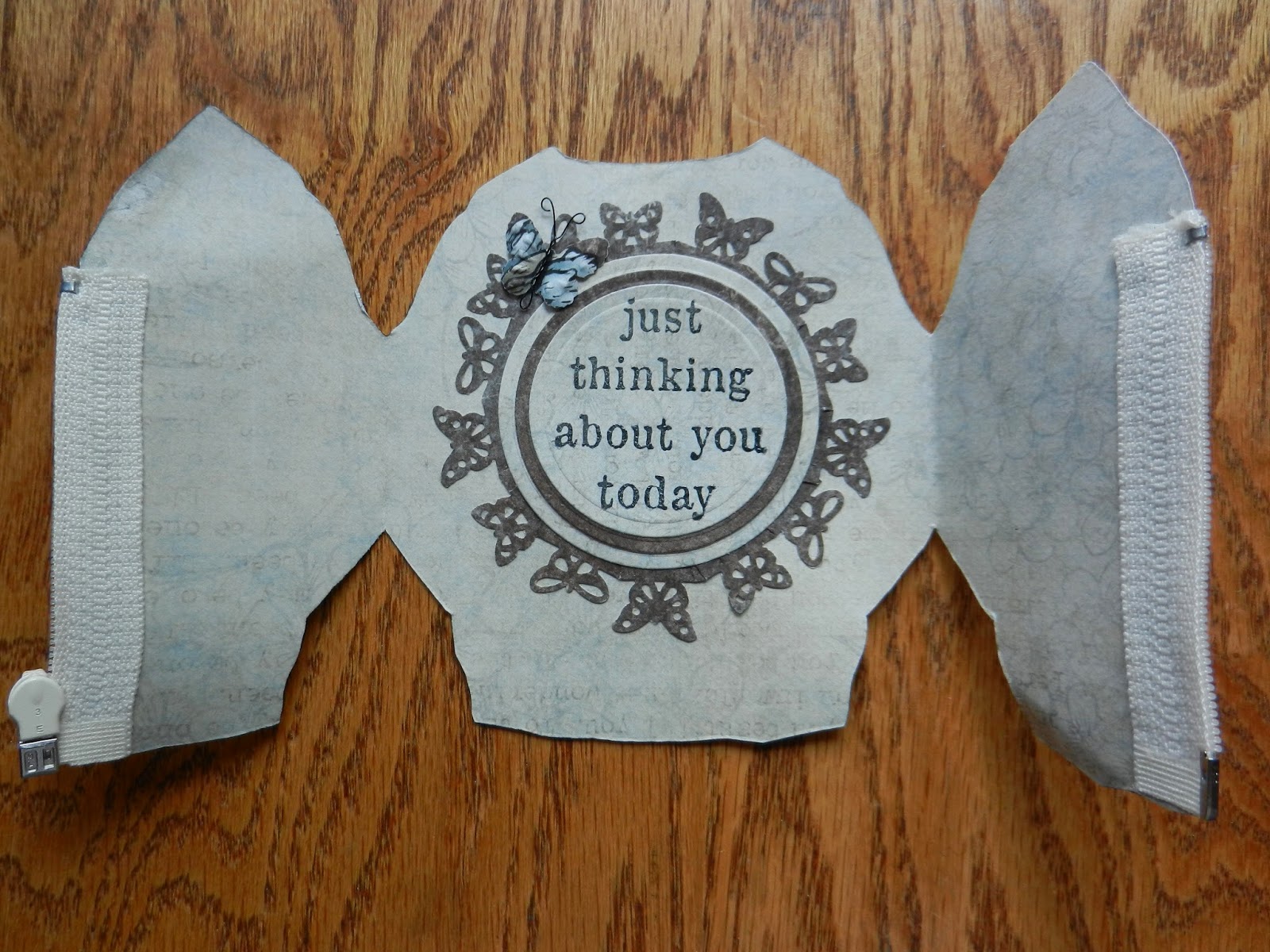 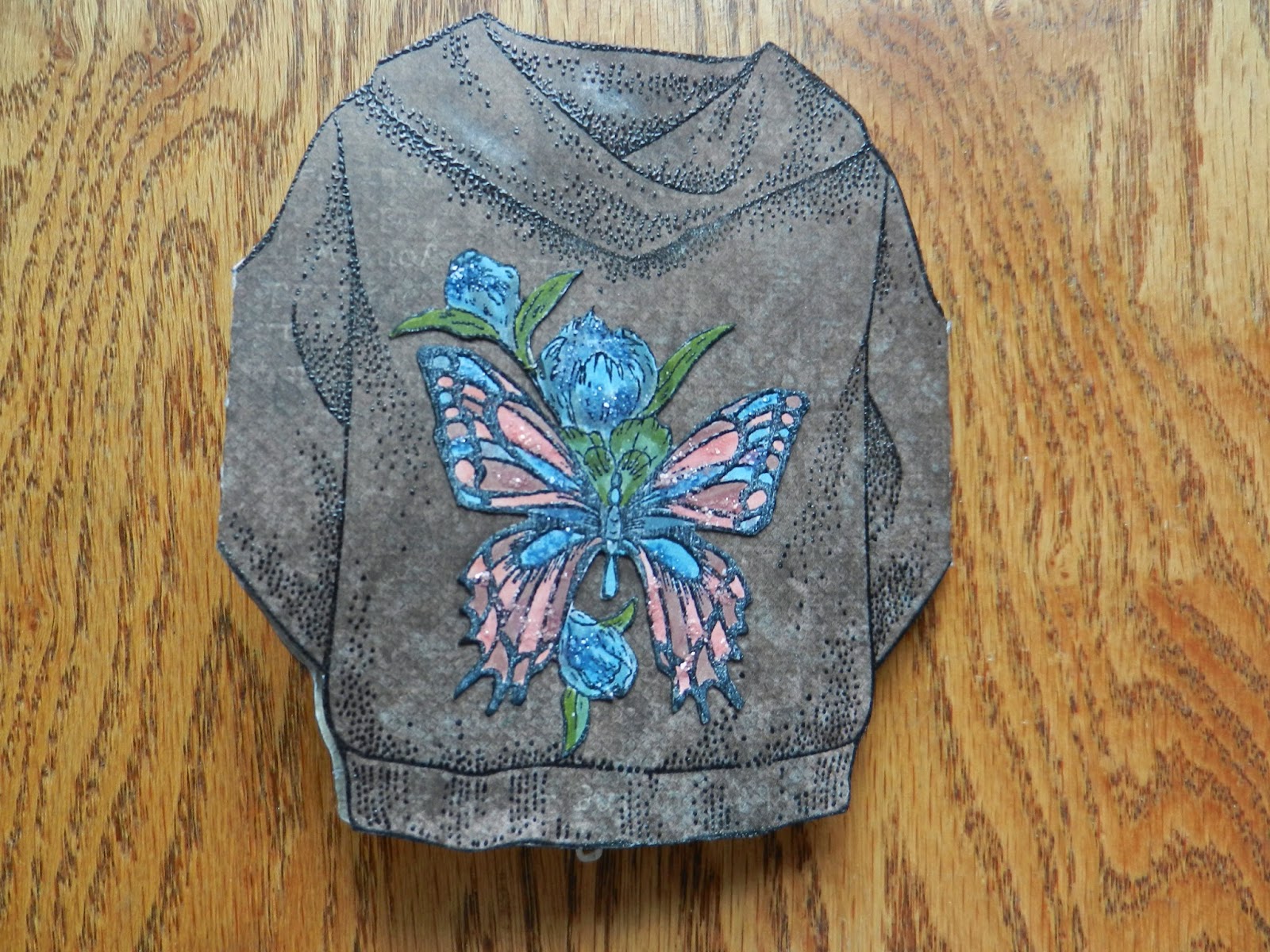 SWEATSHIRT:
CARD
Items used:
Heartfelt Posy Patch Paper
Heartfelt Butterfly and Bunny HCPC3524
Too much fun rubber stamp Sweatshirt
3 inch zipper
Spellbinders standard circles s4-116
Martha Stewart Monarch butterfly edge 42-40047
Nellie Snellen Butterfly Flp-017 large
Jewelry string wire
Ink and embossing powder
Tim Holtz markers
Stickle
I started by stamping the sweatshirt out and embossing the image. Cut around the lines and fold it to create the shirt. Put in the zipper with two sided tape. I then stamped the butterfly and embossed it. Then colored with my Tim Holtz markers. Cut it out and the trimmed parts off so it would  fit the back of the shirt. On the front of the shirt I used the Nellie Snellen butterfly punch. Stickled the raise parts of the butterfly. Pat showed me how to make the center of the butterfly with jewelry wire. The wire is twisted  and curled.  How cute. On the inside I used the sentiment stamp from the stamp set and the Spellbinder circles to fit. I also used the edge monarch butterfly edge and cut it to make it go in a circle. You just cut it as a border and then trim it to about a ½ an inch from the butterflies.  Small cut towards to each side of the butterflies and then it will bended in a circle or oval. 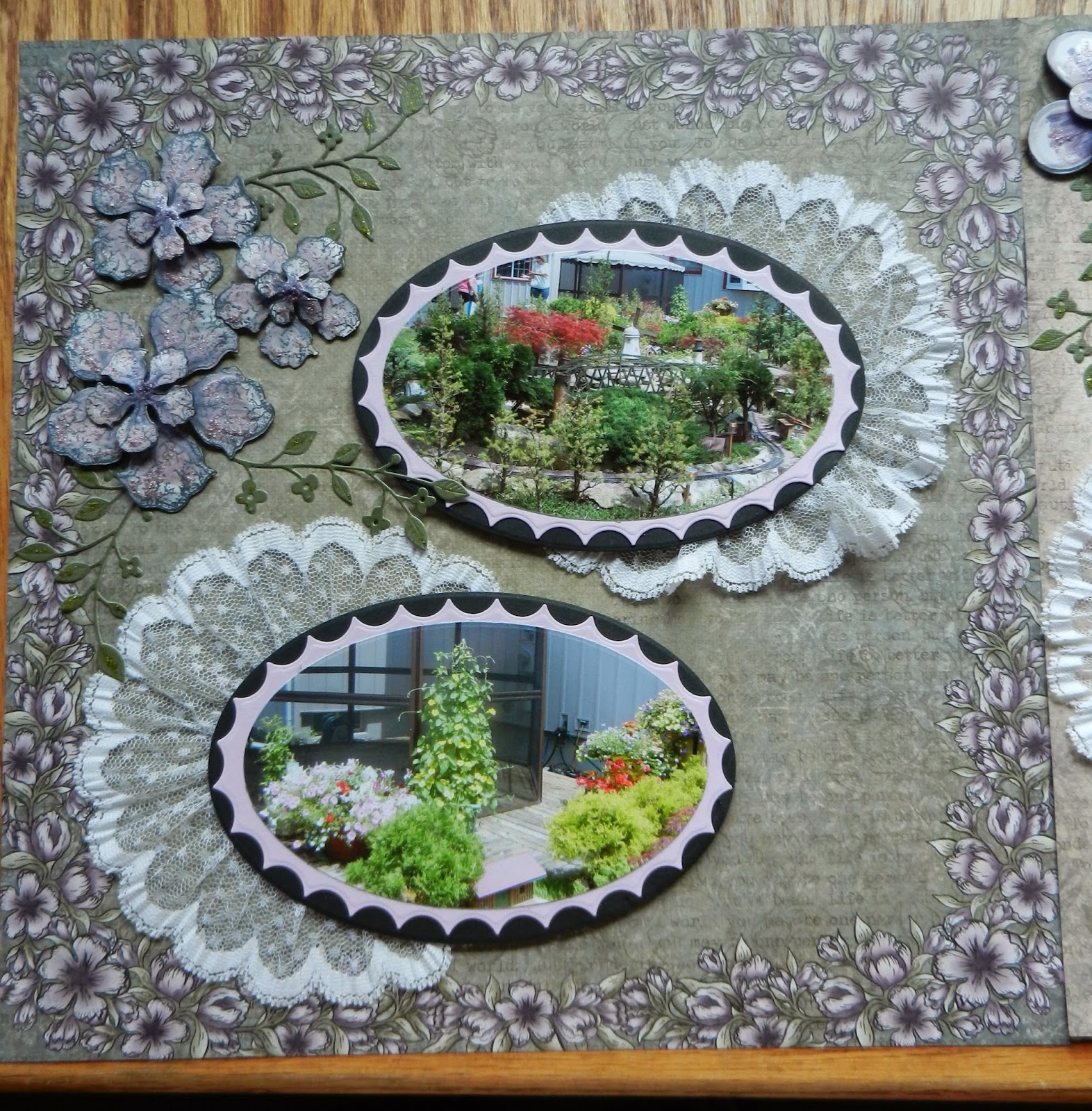 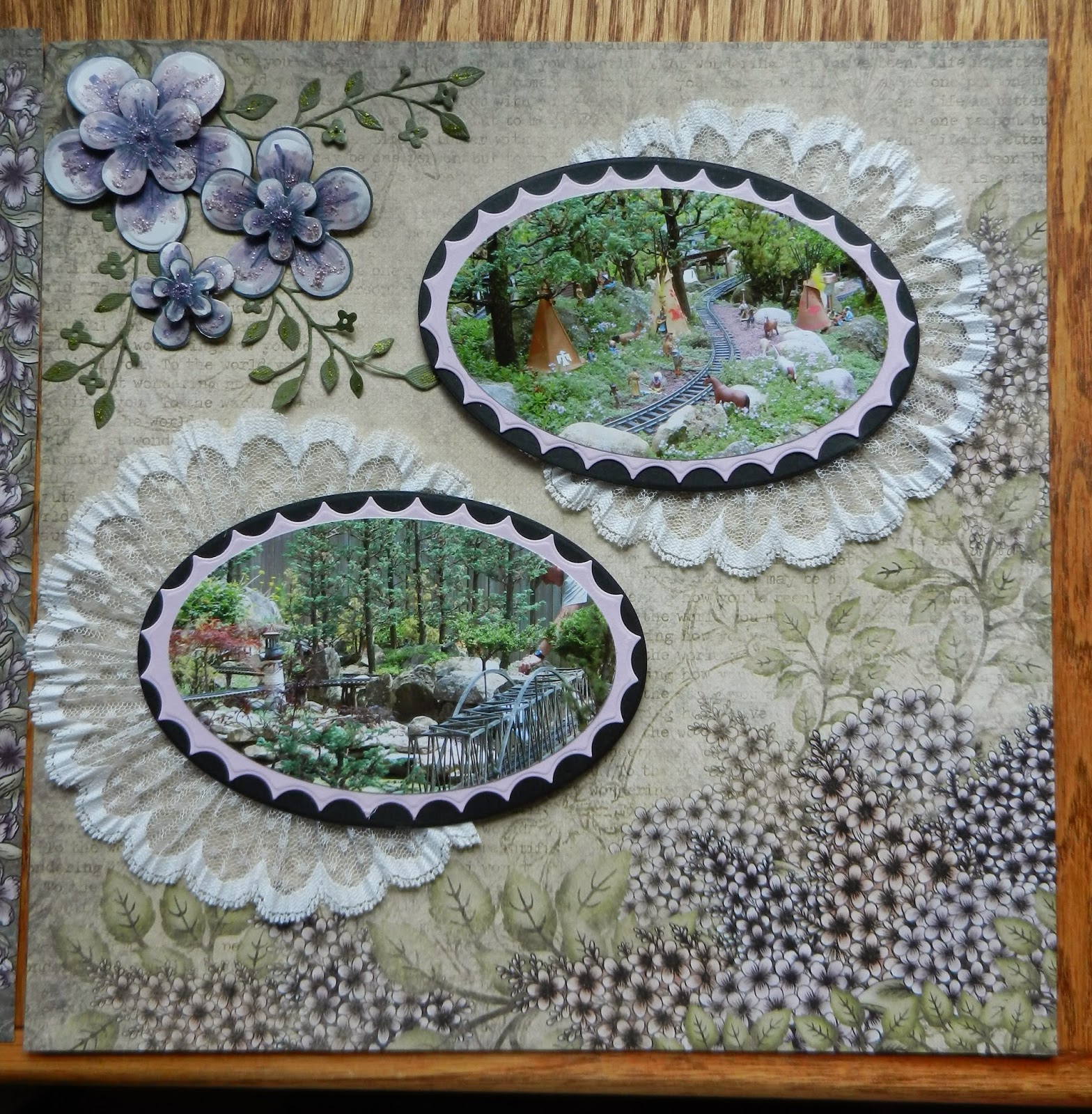 SCRAPBOOK PAGES:
12 X 12 SCRAPBOOK PAGE
Items used:
Heartfelt Posy patch pages
Lifestyle Craft Nesting Ovals l-cc-004
Lifestyle Crafts Nesting inverted Ovals DC0277
Heartfelt/Spellbinders Posy Patch Die HCD-701
Heartfelt Posy Patch Flowers HCDC3303
Heartfelt Vintage/Spellbinders Floret HCD727
Heartfelt Mini Vintage Floret HCPC3502
Heartfelt Vintage Floret HCPC 3500
Memory Box Lavish Branch 9848 6
Stickle peeled paint and dusty concord
Tim Holtz markers
Lace already had. Gathered at one end.
Ranger flat matte Paper
I cut out the picture and matching cardstock with the Lifestyle Craft dies. Layered the cut under the pictures. Took the lace and positioned under the pictures. I then made the two sets Heartfelt flowers. I stamped the flowers on the ranger paper. Used templates to cut the dies. They show this on the Heartfelt  web-site.  Then colored the paper with the Tim Hotlz Markers trying to match the flowers on the paper. Cut out the flowers using templates to cut them. I layered the flowers to my liking.  I cut out the Lavish branch with a green paper. I cut the it in two and placed under the flowers. I then stickle the flower and the branches.
Thanks for visiting. Sue
Posted by Unknown at 5:27 AM No comments: 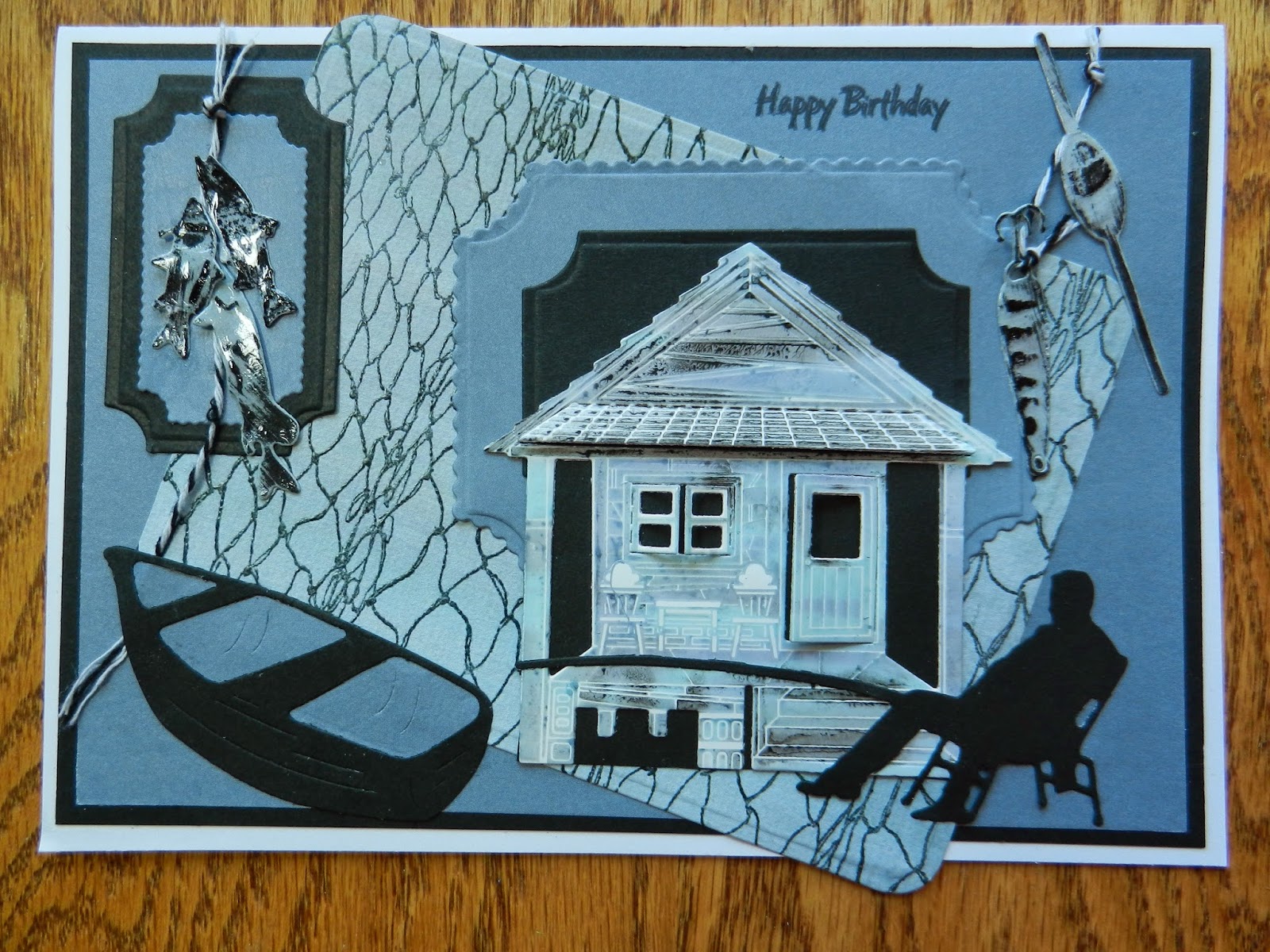 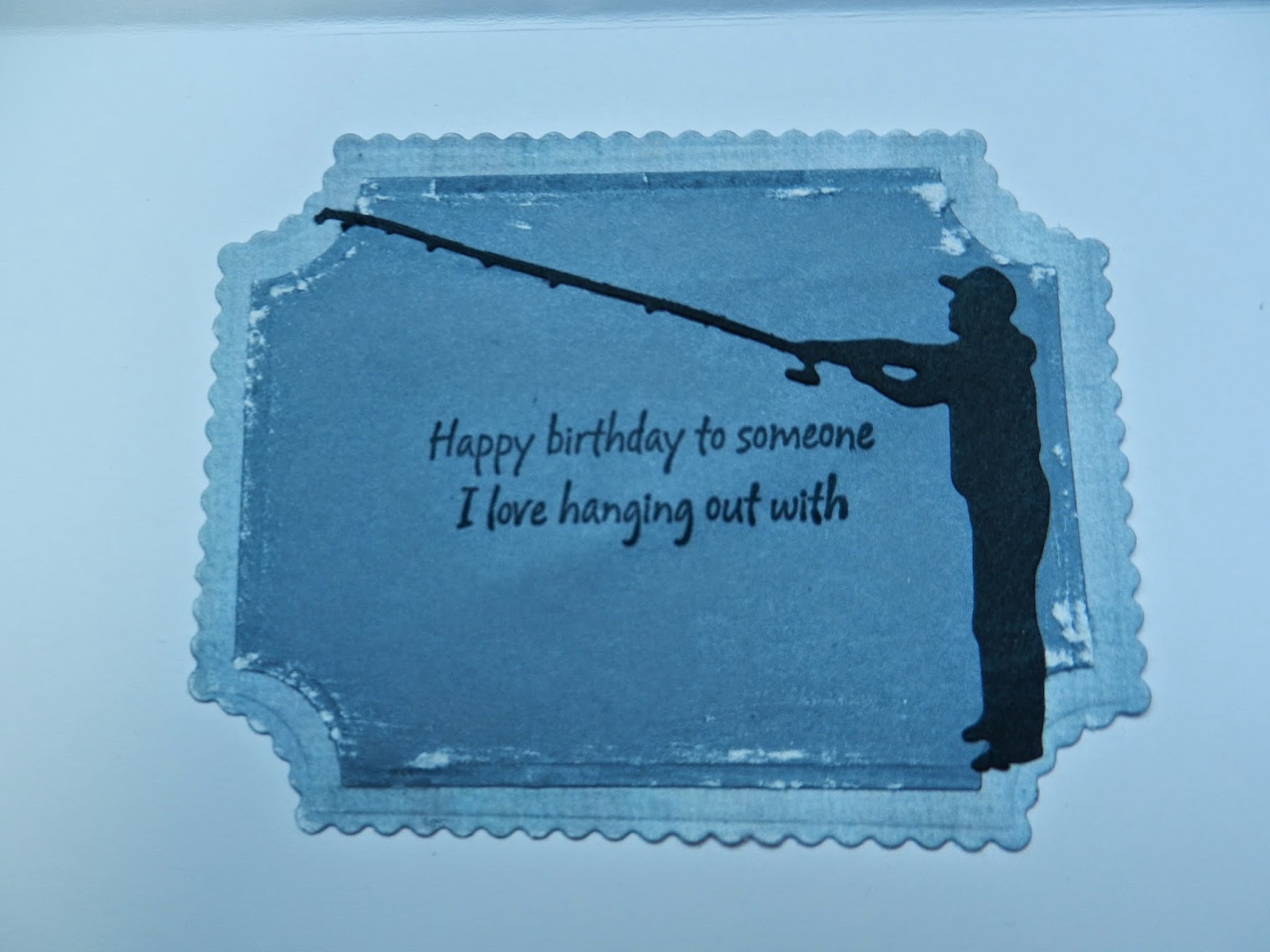 Trim the paper around the edges for layers.  Stamp the Fishing net background and emboss the ink. Then cut with the largest matting basics. Angle on your card.  Cut out the rectangles, the fish, the bobbers and the boat. Stamp the house on glossy paper. The stamp was load with The Tim Holtz markers Start with the lightest color first put the ink in different areas. Then stamp. Cut out the die add the black behind it. The Fish and Bobbers were cut and the ink pad I ran across the top of the papers. I also put some #D Galaxy Gloss across the top of the paper. Place dies in place.

Cut and stamp dies and stamp. Put together. 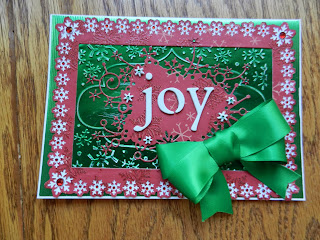 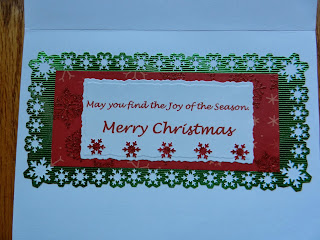 WINTER JOY:
CARD 5 X 7
Card Front:
Items Used:
Memory Box Winter Joy #98640
Cuttlebug Embossing Folder Winter Folic
Spellbinders 5 x 7 Matting Basic A
Crafting Foam
Martha Stewart Punch Around the Page Aspen
Spellbinder Green Foil
Ribbon
Rhinestones
I started by embossing the folder with the green foil. I distressed the foil. I then cut out the red paper with the Martha Stewart Punch around the page Aspen. 6 ¾ x 5. I used the Spellbinder’s Matting Basic to cut out the inside of the punch around the page. I then layered the foil under the punch around the page. I then took some white behind the punch around the page and cut it to fit. Add some green foil paper behind it for an extra layer. Added a double bow.  Add rhinestones.
INSIDE CARD:
Item used:
Martha Stewart Punch Around the Page Aspen
Spellbinders Large Deckled Mega Rectangles
Started by cutting a 6 ¾ x 3 ¼ piece of paper. Used the aspen punch to create the borders. I created the sentiment and used a dark red ink. I cut the sentiment out of the spellbinder Mega Deckled Rectangles. Used some of the snowflakes cut from the punch. I made another layer with the red paper and added to the inside. 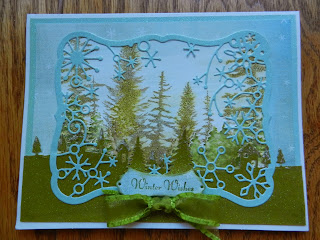 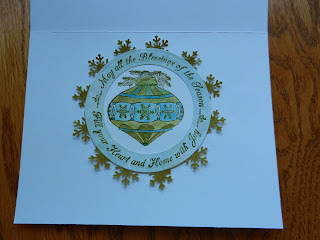 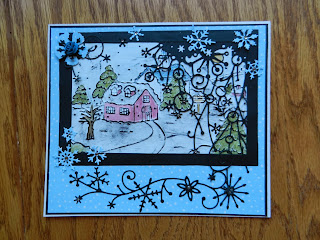 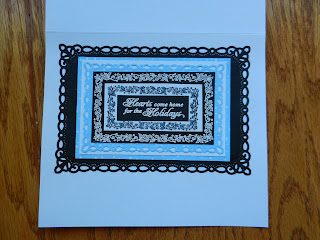 FROSTYVILLE CORNER
Card 7 x 6
Inside card:
Memory Box Frostyville Corner #98637
Memory Box Frostyville Border # 98171
Nellie Snellen Embossing Folder Snowy Village Pif001
Spellbinders 5 X 7 Matting Basic A & B
Cheery Lynn Snowflakes C146
Die-namics Layered Rose 6414
Mulberry Rose
Rhinestones
Oil Based Pencils
Tim Holtz black soot ink
Tim Holtz Distress Stickles Candy Rock
Ranger Stickle Frosted Lace
I started by embossing Snowy Village. I ran my ink pad across the side that has the narrow edges on it.  I looked at a it and thought it need to be colored in. Took out my pencil and colored them in. I did use baby oil to blend the pencil lines. I used the candy rock stickle to make the snow look shiny and glittery. I then took the frosted lace stickle made the trees look like they had some snow on them.  The spellbinder basics were used to make a frame.  The Frostyville Corner was added to the right side of the frame. I placed the frame over the embossed paper and trimmed it to fit. I also made my normal layers around the card. Placed the frame and embossing folder toward the top of the card. Add the Frostyville border to the bottom of the card. I made some snowflakes and attached to the frame. In the upper left hand corner I made a flower with the layered rose, a snowflake and a mulberry rose. I cut out the Frostyville corner and cut parts out to ad under the flower. Added rhinestones anywhere I thought they should go.
INSIDE:
Item used:
Spellbinders Romantic Rectangles S5-090
JustRite Stamps Christmas Nested Frames
Embossing Podwer
Ink
I stamp the frame and sentiments and used embossing powder. I trimmed each one to fit. Layered the Romantic Frames behind them. 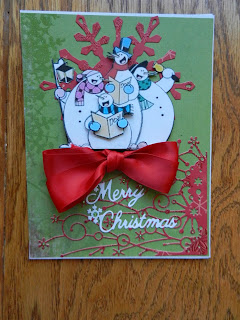 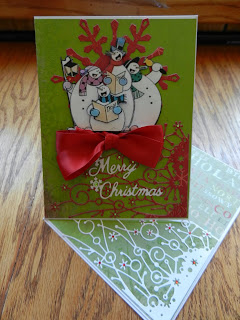 Posted by Unknown at 4:40 AM No comments: 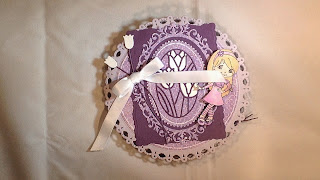 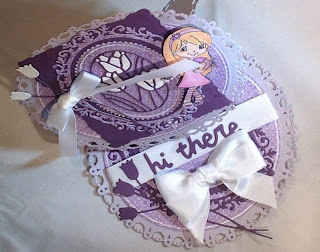 I made the circle easel card from following this video:


After you make the card cut out the dies and place on the card. The tulips in the center I cut out twice and place the white were the tulips are. This is where I found the digi-stamps. I did spray the paper with workable fixative so it did not run with the oil pencils.  I use baby oil to blend the pencil so it was smearing the black ink.


I cut out the stamp and used foam to raise it up. Again I used the ribbon to help hold the top of the card. I put the hi there on the ribbon. Add 2 bows and you are done.

SNOWFLAKE SPINNER
4 ¼ X 5 1/2 Card
ITEMS USED:
Joy Craft Ice Snowflake Crystal 6002/2020, 6002/2018 and 6002/2019
Lifestyle Craft Circles L-CC-001
Lifestyle Craft Inverted Circles DC0276
Spellbinders Small Deckled Mega Rectangles
Marianne Design Snowman LR0246
Marianne Design Merry Christmas LR0225
Whimsy Stamps Snowflake Border WSD172
Sizzix Embossing Folder Christmas Set 655841
Cuttlebug Embossing Folder (could not find any information on)
Sizzix Winter by Emily Humble
Tim Holtz Distress ink Faded Jeans
Ranger Stickle Diamond
Follow the tutorial I found on-line to make card. I did use a little different item. You can do many different thing in the center.
http://inspirationaltechniquesandtutorials.blogspot.com/2008/08/snowflake-spinner-tutorial.html
I ran my ink pad over the embossed snowflakes. When I made the snowman I use a dauber to color the raised embossed areas. I used stickle on the raised parts of the snowman and all the snowflakes on the embossing folder. The blue paper I sprayed with Spry and Sparkle Iridescent.  I add the Snowflake border to the sides of the card with rhinestones In the center of the snowflakes. I stamped the let it snow and cut it with the Deckled mega rectangles. I also shorten on side by cutting with a deckled blade. Also embossed with the Deckled rectangle. I raised the Let it snow and the snowman with foam squares. I added the snowflakes it the top of the inside of the card. I also added the Merry Christmas to the inside under the snowflake spinner.
Posted by Unknown at 5:36 PM No comments: 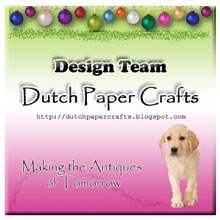